Bulletin Board Systems: The VICE Exposé

By now, you have almost certainly heard of the dark web. On sites unlisted by any search engine, in forums that cannot be accessed without special passwords or protocols, criminals and terrorists meet to discuss conspiracy theories and trade child pornography.

We here at VICE headquarters have reported before on the dark web’s “hurtcore” communities, its human trafficking markets, its rent-a-hitman websites. We have explored the challenges the dark web presents to regulators, the rise of dark web revenge porn, and the frightening size of the dark web gun trade. We have kept you informed about that one dark web forum where you can make like Walter White and learn how to manufacture your own drugs, and also about—thanks to our foreign correspondent—the Chinese dark web. We have even attempted to catalog every single location on the dark web. Our coverage of the dark web has been nothing if not comprehensive.

But I wanted to go deeper.

A month ago, I set out to find it. Unsure where to start, I made a post on Reddit, a website frequented primarily by cosplayers and computer enthusiasts. I asked for a guide, a Styx ferryman to bear me across to the mythical underworld I sought to visit.

Only minutes after I made my post, I received a private message. “If you want to see it, I’ll take you there,” wrote Reddit user FingerMyKumquat. “But I’ll warn you just once—it’s not pretty to see.”

This would not be like visiting Amazon to shop for toilet paper. I could not just enter an address into the address bar of my browser and hit go. In fact, as my Charon informed me, where we were going, there are no addresses. At least, no web addresses.

But where exactly were we going? The answer: Back in time. The deepest layer of the internet is also the oldest. Down at this deepest layer exists a secret society of “bulletin board systems,” a network of underground meetinghouses that in some cases have been in continuous operation since the 1980s—since before Facebook, before Google, before even stupidvideos.com.

To begin, I needed to download software that could handle the ancient protocols used to connect to the meetinghouses. I was told that bulletin board systems today use an obsolete military protocol called Telnet. Once upon a time, though, they operated over the phone lines. To connect to a system back then you had to dial its phone number.

The software I needed was called SyncTerm. It was not available on the App Store. In order to install it, I had to compile it. This is a major barrier to entry, I am told, even to veteran computer programmers.

When I had finally installed SyncTerm, my guide said he needed to populate my directory. I asked what that was a euphemism for, but was told it was not a euphemism. Down this far, there are no search engines, so you can only visit the bulletin board systems you know how to contact. My directory was the list of bulletin board systems I would be able to contact. My guide set me up with just seven, which he said would be more than enough.

More than enough for what, I wondered. Was I really prepared to go deeper than the dark web? Was I ready to look through this window into the black abyss of the human soul? 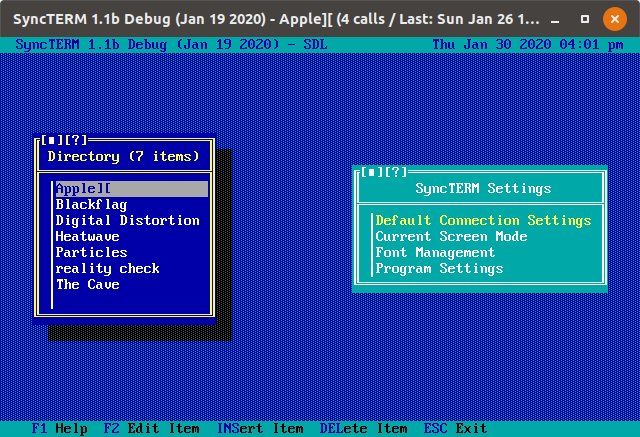 The vivid blue interface of SyncTerm. My directory of BBSes on the left.

I decided first to visit the bulletin board system called “Heatwave,” which I imagined must be a hangout for global warming survivalists. I “dialed” in. The next thing I knew, I was being asked if I wanted to create a user account. I had to be careful to pick an alias that would be inconspicuous in this sub-basement of the internet. I considered “DonPablo,” and “z3r0day,” but finally chose “ripper”—a name I could remember because it is also the name of my great-aunt Meredith’s Shih Tzu. I was then asked where I was dialing from; I decided “xxx” was the right amount of enigmatic.

And then—I was in. Curtains of fire rolled down my screen and dispersed, revealing the main menu of the Heatwave bulletin board system.

The main menu of the Heatwave BBS.

I had been told that even in the glory days of bulletin board systems, before the rise of the world wide web, a large system would only have several hundred users or so. Many systems were more exclusive, and most served only users in a single telephone area code. But how many users dialed the “Heatwave” today? There was a main menu option that read “(L)ast Few Callers,” so I hit “L” on my keyboard.

My screen slowly filled with a large table, listing all of the system’s “callers” over the last few days. Who were these shadowy outcasts, these expert hackers, these denizens of the digital demimonde? My eyes scanned down the list, and what I saw at first confused me: There was a “Dan,” calling from St. Louis, MO. There was also a “Greg Miller,” calling from Portland, OR. Another caller claimed he was “George” calling from Campellsburg, KY. Most of the entries were like that.

It was a joke, of course. A meme, a troll. It was normcore fashion in noms de guerre. These were thrill-seeking Palo Alto adolescents on Adderall making fun of the surface web. They weren’t fooling me.

I wanted to know what they talked about with each other. What cryptic colloquies took place here, so far from public scrutiny? My index finger, with ever so slight a tremble, hit “M” for “(M)essage Areas.”

The system showed me message after message. There was advice about how to correctly operate a leaf-blower, as well as a protracted debate about the depth of the Strait of Hormuz relative to the draft of an aircraft carrier. I assumed the real messages were further on, and indeed I soon spotted what I was looking for. The user “Kevin” was complaining to other users about the side effects of a drug called Remicade. This was not a drug I had heard of before. Was it some powerful new synthetic stimulant? A cocktail of other recreational drugs? Was it something I could bring with me to impress people at the next VICE holiday party?

I googled it. Remicade is used to treat rheumatoid arthritis and Crohn’s disease.

In reply to the original message, there was some further discussion about high resting heart rates and mechanical heart valves. I decided that I had gotten lost and needed to contact FingerMyKumquat. “Finger,” I messaged him, “What is this shit I’m looking at here? I want the real stuff. I want blackmail and beheadings. Show me the scum of the earth!”

“Perhaps you’re ready for the SpookNet,” he wrote back.

Each bulletin board system is an island in the television-static ocean of the digital world. Each system’s callers are lonely sailors come into port after many a month plying the seas.

But the bulletin board systems are not entirely disconnected. Faint phosphorescent filaments stretch between the islands, links in the special-purpose networks that were constructed—before the widespread availability of the internet—to propagate messages from one system to another.

One such network is the SpookNet. Not every bulletin board system is connected to the SpookNet. To get on, I first had to dial “Reality Check.”

Once I was in, I navigated my way past the main menu and through the SpookNet gateway. What I saw then was like a catalog index for everything stored in that secret Pentagon warehouse from the end of the X-Files pilot. There were message boards dedicated to UFOs, to cryptography, to paranormal studies, and to “End Times and the Last Days.” There was a board for discussing “Truth, Polygraphs, and Serums,” and another for discussing “Silencers of Information.” Here, surely, I would find something worth writing about in an article for VICE.

I browsed and I browsed. I learned about which UFO documentaries are worth watching on Netflix. I learned that “paper mill” is a derogatory term used in the intelligence community (IC) to describe individuals known for constantly trying to sell “explosive” or “sensitive” documents—as in the sentence, offered as an example by one SpookNet user, “Damn, here comes that paper mill Juan again.” I learned that there was an effort afoot to get two-factor authentication working for bulletin board systems.

“These are just a bunch of normal losers,” I finally messaged my guide. “Mostly they complain about anti-vaxxers and verses from the Quran. This is just Reddit!”

“Huh,” he replied. “When you said ‘scum of the earth,’ did you mean something else?”

I had one last idea. In their heyday, bulletin board systems were infamous for being where everyone went to download illegal, cracked computer software. An entire subculture evolved, with gangs of software pirates competing to be the first to crack a new release. The first gang to crack the new software would post their “warez” for download along with a custom piece of artwork made using lo-fi ANSI graphics, which served to identify the crack as their own.

I wondered if there were any old warez to be found on the Reality Check BBS. I backed out of the SpookNet gateway and keyed my way to the downloads area. There were many files on offer there, but one in particular caught my attention: a 5.3 megabyte file just called “GREY.”

I downloaded it. It was a complete PDF copy of E. L. James’ 50 Shades of Grey.

I first heard about the FOAF (Friend of a Friend) standard back when I wrote my post about the Semantic Web. I thought it was a really interesting take on social networking and I've wanted to write about it since. Finally got around to it!https://t.co/VNwT8wgH8j